Showing posts from September, 2013
Show all

- September 14, 2013
Cruise Ship M.V. "LISBOA" is one of the four ships acquired by PORTUSCALE CRUISES from C.I.C., the others being, FUNCHAL, now back in service, PORTO and AZORES. Showing here at Lisbon last month is the "LISBOA" still bearing her previous name, the ship is undergoing a massive and comprehensive refit, she is due in dry dock in October and is expected to start cruising again out of Marseille on the 21.2.2014. Photos 27.8.2013
6 comments
Location: Lisbon, Portugal
Read more

- September 08, 2013
The newly rebuilt FUNCHAL departed Goteborg on her inaugural cruise last monday, the 2.9.2013, the ship visited on this maiden voyage after resuming service ending a period of three years laid-up in Lisbon and the changing of owners from C.I.C. to the brand new PORTUSCALE CRUISES, first Portuguese Cruising Company, Kirkwall, Invergordon and Aberdeen before arriving back tomorrow at the Swedish Port of Goteborg. FUNCHAL had a scheduled call at Leith/Edinburgh yesterday but apparently due to bad weather this was cancelled. Photos above taken by Richard Clack, copyright photos , 5.9.2013. Thank you very much Richard for sending me these excellent photos.
4 comments
Location: Invergordon, Highland, UK
Read more 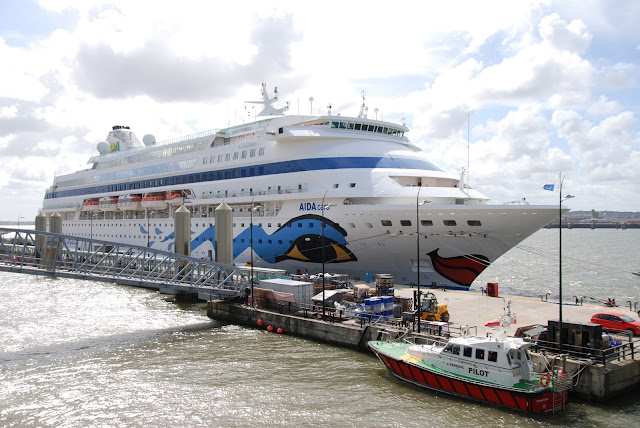 Last week-end was particularly busy for CRUISE-LIVERPOOL, the "AIDAcara" visited the city of Liverpool on the last day of August and "CELEBRITY INFINITY" the following day, this magnificent CELEBRITY CRUISES ship visited the city of Liverpool four times this year, on her last call she disembarked and embarked her passengers, good news for CRUISE-LIVERPOOL, next year a total of 52 calls are expected an all time record for cruise ships. Photos below taken inside the provisional Cruise Terminal and the Cruise Ships "AIDAcara" and "CELEBRITY INFINITY", 31.8.2013 and 1.9.2013
Post a Comment
Location: Liverpool, Merseyside, UK
Read more

- September 02, 2013
"OCEAN PRINCESS" is the former R-Four, built for Renaissance Cruises by Chantiers de L'Atlantique in 1999, after the demise of Renaissance the ship was laid-up until 2002 when she was bought by Princess Cruises, at first she was named TAHITIAN PRINCESS but in November of 2009 the ship was renamed "OCEAN PRINCESS". This Handsome cruise ship has a reputation for being elegant, gorgeous and intimate, she can accommodate 670 passengers and is 30.277 G.T. When the ship was acquired by Princess Cruises the exterior of the ship was outfitted with blue-tinted windows, a trademark of the company. "OCEAN PRINCESS" is seen here at Dover, 30.8.2013
1 comment
Location: Dover, Kent, UK
Read more 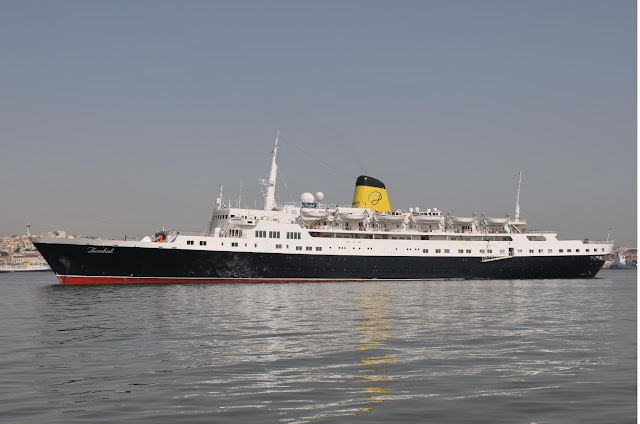 Safety issues strand cruise ship - Göteborg Daily : "FUNCHAL" one of the most talked about passenger ships at the moment, was due to start her maiden voyage on the 27.8.2013 cruising to the Norwegian Fjords, the ship after arrival at the Swedish Port of Goteborg failed the local safety inspection, several anomalies were founded, as a result the 1961 year built cruise ship had to cancel her first voyage. These sort of incidents are quite normal on any passenger ships despite the age of the ship, the Portuguese Operator decided to repair the ship at the Port and is working hard in order to guarantee the beginning of "FUNCHAL" cruising as soon as possible, the majority of the technical issues were rectified on the very same day of the inspection, there was one last issue which is now been looked after, this now unique passenger ship was totally rebuilt during the last few months, the next scheduled cruise for "FUNCHAL" is the SCOTISH LANDS, with departure t
1 comment
Read more
More posts