Showing posts from January, 2012
Show all

Getting intimate with ships 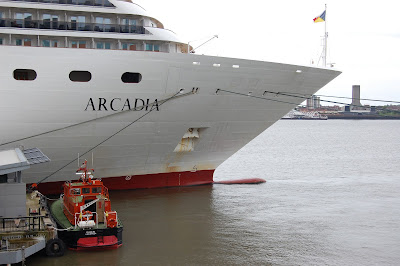 When I have the opportunity, I just adore spending time watching the routine operations surrounding the day to day life of ships, getting intimate with them, few photos taken last year during the "ARCADIA's" visit to the city of Liverpool, 26th August 2011
Post a Comment
Location: Liverpool, Merseyside, UK
Read more 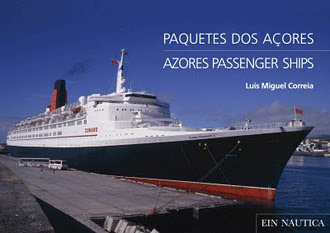 AZORES PASSENGER SHIPS by Maritime Historian and Photographer Luis Miguel Correia is a marvellous and moving job, the whole book is beautifully written, absorbing and educational, it's a terrific account of the ships of the past and present visiting the Portuguese Islands of the Azores, packed full of detail, the author is to be congratulated, a must for all ships enthusiasts and anyone with an interest in Maritime History.
Post a Comment
Read more 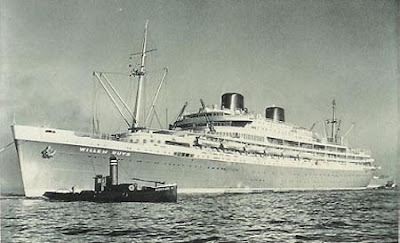 "WILLEM RUYS" becomes ACHILLE LAURO is by far the most visited post on this blog, so I felt the need of doing another one dedicated to this great ship, a favourite of mine, in order to create something different I have chosen to publish some photos of the aftermath of the collision with "ORANGE" in January 1953, all photos copyright Rotterdamsche Lloyd Museum . A big thank you once again to the museum, without their co-operation this post would not be possible
Post a Comment
Read more 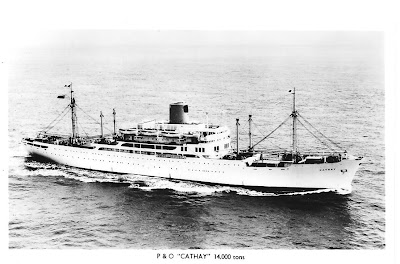 Built in 1957 for COMPAGNIE MARITIME BELGE as the BAUDOUINVILLE she was sold to P & O in 1961 to operate from the UK to the Far East, she was sold to CHINA OCEAN SHIPPING in 1978. The 14.000 GRT ship was sold for scrap in 1996, beautiful postcard kindly sent by my friend Antonio Silva
1 comment
Read more

This post is dedicated to all the Italian followers of this blog. This past week saw an unprecedented number of pageviews from Italy, I was really pleased to notice that the post "WILLEM RUYS BECOMES ACHILLE LAURO" is the most popular post of this blog, leading by far all the posts related to the COSTA CONCORDIA's tragedy, so despite the relevance of the tragic events which obviously dominated the news not just in Italy but around the world, there is an obvious interest on Italian passenger liners and this is reassuring for me, I do believe that the most beautiful liners came out of Italy, this is why I have chosen CRISTOFORO COLOMBO for many the most elegant liner ever built as a testimony of appreciation to the great nation that Italy was and still is as far as shipping and ship building is concerned, so thank you to all my Italian followers, I will endeavour to carry on with the best possible work on this blog. Postcards of my collection
45 comments
Read more 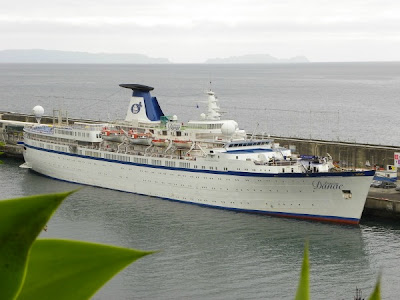 The 17,000 GT and 570 passenger PRINCESS DANAE has begun recently out of Marseilles a round the world cruise with the duration of 127 nights. The portuguese flagged cruise ship is currently chartered for the french market by the touristic operator Notre Temps. Therefore PRINCESS DANAE visited Funchal this week on a westbound transatlantic to the Caribbean before making her way to the Pacific passing the Panama canal first. Hard to believe but the ship's lower structure is at sea since the mid 50's, when she was built by Harland & Wolf shipyards and started operations as a refrigerated cargo ship named PORT MELBOURNE. She was eventualy converted for passanger shipping and went through different changes before being purchased by portuguese owned Arcalia Shipping, nowadays knowned as Classic International Cruises. Photographs taken at Funchal on the ship's call in New Year's Day. On the right side image, we can notice her previous name camouflaged with a roll of new p
1 comment
Read more 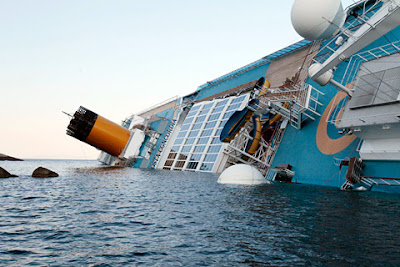 Join the best site, in my opinion, dedicated to cruising and cruise ships in the UK  www.cruisecritic.co.uk
1 comment
Read more 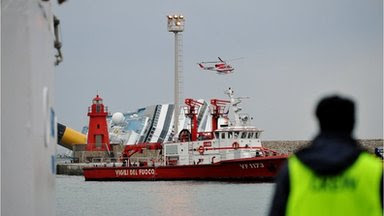 With better weather conditions, the search for missing people resumed, still 15 people unaccounted, there were fears as well that with the worsening of weather conditions the ship might sink even further, slipping from her rocky resting place, in the meantime worries of an environmental disaster is also a priority for the authorities
Post a Comment
Read more 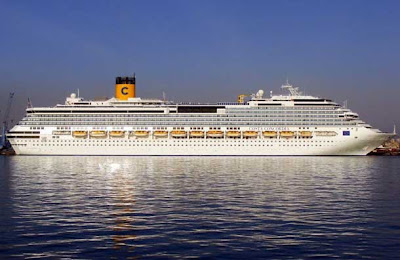 COSTA CONCORDIA disaster and the challenges ahead for the Cruising Industry 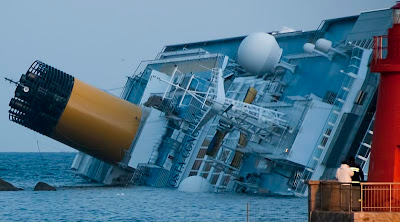 Five people have now died on the COSTA CONCORDIA and 15 are still missing, so unfortunately the number is likely to increase, an official enquiry of the causes of this dramatic accident, the worst with a cruise ship is under way but is likely to take months until we know the reasons behind this disaster. The pictures of the stricken  massive COSTA CONCORDIA  lying helpless on her starboard side is sending shock waves through the Cruising Industry, the past decade saw a dramatic increase in the number of new built cruise ships and customers, in the UK alone 1.7 million people decided to take a cruise for their holidays, this accident is unlikely to put off regular cruisers, the industry's fear should concentrate on " new cruisers " a vital sector for the growth of the industry. Any form of travel carries risk and travelling by sea, even on these mega cruise ships is no exception. Taking a cruise is without a doubt the safest and more secure holiday and accidents like thi
Post a Comment
Location: Giglio, 58012 Isola del Giglio Province of Grosseto, Italy
Read more 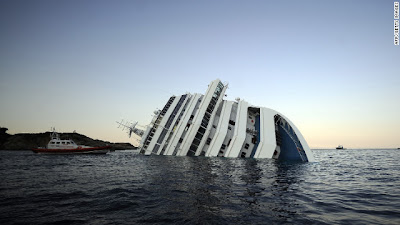 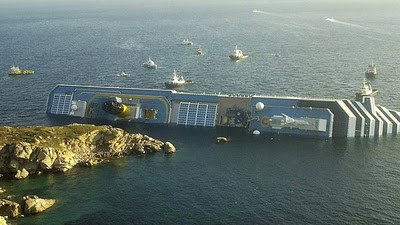 Apparently at least still 50 people missing after the tragic accident with COSTA CONCORDIA last night, latest news confirm 3 dead and 14 injured but with so many people missing these figures are likely to increase, the accident happened just off the Tuscan Island of Giglio, investigations will take place to try and find out why this new ship, not slightly new as per some recent reports, the ship was built in 2006 and is equipped with the latest technology ran aground. Photo taken from the internet
Post a Comment
Location: Isola del Giglio Province of Grosseto, Italy
Read more

COSTA CONCORDIA runs aground in Italy

The new COSTA CONCORDIA built in 2006 and operated by COSTA CRUISES run aground last night, three hours after leaving the port of Civitavecchia, three people are reported dead and others missing, read all about it here  www.huffingtonpost.co.uk . Photo included taken from the internet
1 comment
Read more 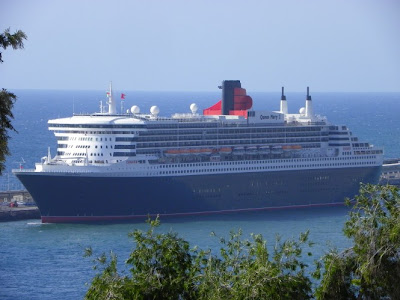 The QM2 made yet another visit to Madeira today, from Southampton on her first port of call of the 2012 World Cruise. In this first leg of the 108 night grand journey, the Cunarder is southbound towards the Cape of Good Hope. Afterwars she's due to visit several other destinations in Australia, Far East, India, Midle East, Suez Canal and the Med. It was almost eight years ago, on the 15th January 2004 that the QM2 made her inaugural in Funchal, first port of call on her maiden voyage. And what a great event it was, as a crowd of locals, myself among them, wake up very early to witness the largest cruise ship in the World at the time making it's way in the bay. A special date to remember in my ships enthusiastic life forever. Text & Photos: João Abreu-Funchal.
1 comment
Read more 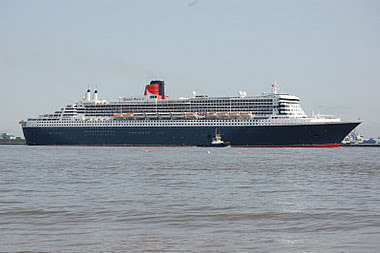 Happy Birthday QM2, STILL THE ONLY WAY TO CROSS. Photos 5 and 6 by Joao Abreu
Post a Comment
Read more

The SS "LEONARDO DA VINCI" was an ocean liner built by ANSALDO SHIPYARDS at Genoa in 1960, the ship was intended as a replacement for the ill-fated ANDREA DORIA to operate on the North Atlantic run with ITALIAN LINE, she was as built 33.340 GRT and had a top speed of 25.5 knots. The ship left on her maiden voyage on the 30th June 1960 from Genoa to New York, she was kept on this service until 1965 when the new superliners MICHELANGELO and RAFFAELLO entered service, LEONARDO was then used on cruising in the MED, CARIBBEAN, SOUTH and NORTH AMERICA, after the withdrawal of the new superliners from service on the North Atlantic due to lack of passengers  LEONARDO was back on the transtlantic service, but only for a brief spell, she went back to cruising until 1978 when she arrived at La Spezia in Italy to be laid up, she caught fire in 1980 and was considered a total loss, she was finally scrapped in 1982, a brief career for such a beautiful ship, she was not a lucky vessel un
10 comments
Read more

"FUNCHAL" seen from the "Monument of the Discoveries" in Lisbon 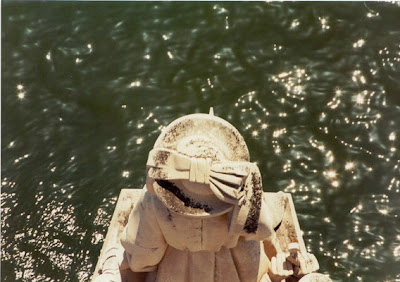 The cruise ship "FUNCHAL" is seen here from the "Monument of the Discoveries" in Lisbon monitored by Henry the Navigator, a monument built on the edge of the river Tagus, where ships, very different ships, departed to explore and trade, photos 1989
Post a Comment
Location: Lisbon, Portugal
Read more
More posts