Showing posts from June, 2012
Show all

CRUISE SHIPS AND LINERS back at Barcelona

- June 30, 2012
Our Blog is once again at Barcelona for some cruise ships spotting, seen here today are, three very distinctive cruise ship types, top photo the "SOVEREIGN", "LIBERTY OF THE SEAS" and the "EXPLORER", for further posts and other passenger ships calling at this glorious city, please follow the Blog in the next few days. Photos 30.6.2012
Post a Comment
Location: Barcelona, Spain
Read more 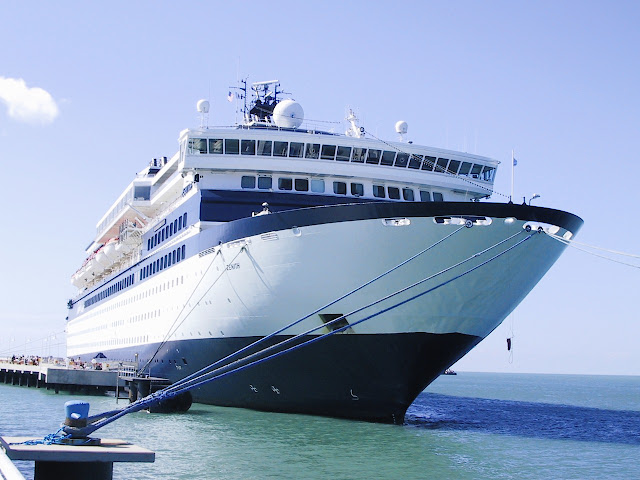 During the nineties and the early years of this new century the sisters HORIZON and ZENITH operated by CELEBRITY CRUISES ranked amongst my favourite cruise ships, they were also two of the most prestigious cruise ships afloat, I have never sailed on both of them but my brother, who I thank for the photos included, sailed on the ZENITH in 2005 and loved the experience. "ZENITH" was built by MEYER WERFT in Germany, a sign of quality in its own in 1992 and was operated until 2007 by CELEBRITY, with the growing reputation of the company and the need for much larger tonnage the sisters were sold. As built the "ZENITH" was 47.255 GRT with capacity for just over 1700 passengers, the ship had a cruising speed of 21.5 knots, propelled by Diesel Engines. "ZENITH" is still sailing, at twenty she probably is in her prime, she is operated by Spanish PULLMANTUR and still offering a great cruising experience, for passengers that dislike the massive new crui
Post a Comment
Location: Key West, FL 33040, USA
Read more 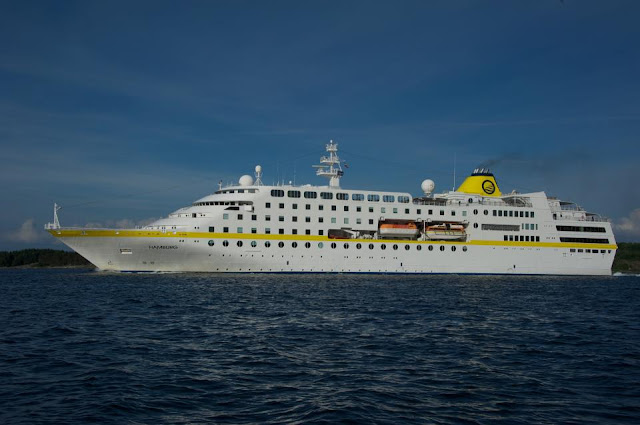 Built in Germany in 1997, the cruise ship "HAMBURG" is owned by Hapag-Lloyd and was previously named COLUMBUS, she is only 15.200 GRT and cruises at 16 knots, the ship has capacity for 400 guests and is today operated by Plantours as the "HAMBURG". She is a fine looking small yacht-like vessel with very luxurious interiors and provides to her passengers a very cosy and friendly atmosphere, the ideal size ship for many passengers. I have never photographed the "HAMBURG" or previously the COLUMBUS so have to thank two keen contributors to this Blog, top image by Harald Oanes in Norway and Rui Agostinho for the other two photos, in Lisbon.
46 comments
Read more 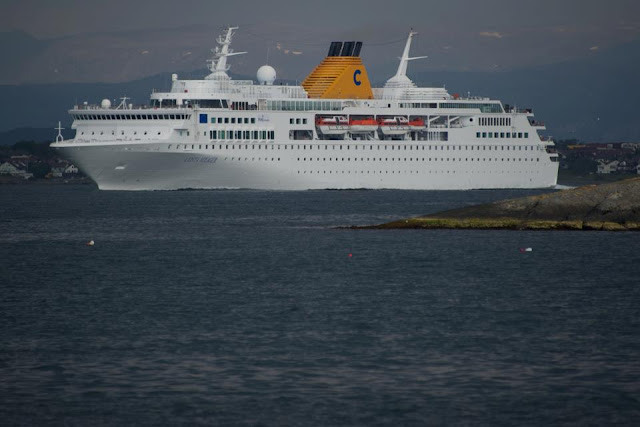 "COSTA VOYAGER" is the latest addition to the famous COSTA CROCIERE fleet, the ship was built in Germany by BLOHM + VOSS at Hamburg in 2000 as the OLYMPIC VOYAGER, she was recently operated by IBERO CRUCEROS as the GRAND VOYAGER, the change of owners took place late last year with the ship entering service with COSTA in December of 2011. This small cruise-ship is 24.391 GRT, at the moment "COSTA VOYAGER" is covering for COSTA ALLEGRA damaged by fire earlier this year, she will return to her weekly cruises in the MED in July. Photos above "COSTA VOYAGER" at Stavanger/Norway last 5.6.2012, copyright Harald Oanes and GRAND VOYAGER last July at Portimao.
Post a Comment
Read more 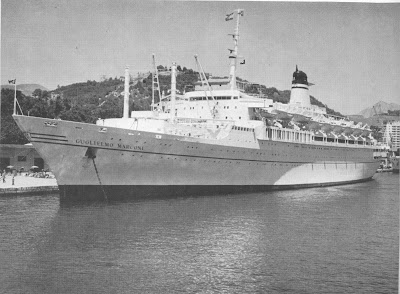 This Blog is now one year old, during this period I have been checking for old archive on Liners to share with all the readers of this page, bring back memories that span for four decades, while digging deep for relevant material, the Lloyd Triestino 1963 twin sisters GUGLIELMO MARCONI and GALILEO GALILEI beat all competitors by far, particulary MARCONI, one easy explanation, back in 1976 I have worked with the ship for nearly two years during her ITALIA LINE spell on the South American route and travelled on her in 1976 a 10 nights round-trip voyage from Lisbon. During this period I have been given by members of the crew a lot of old brochures, photos and postcards that go back to the 60's during her Lloyd Triestino career, so to celebrate one year blogging I have decided to create a new Blog on GUGLIELMO MARCONI. The new adventure will set sail in July so please keep following this Blog and you won't be disappointed. Photos above, top one MARCONI during an around the wor
Post a Comment
Read more 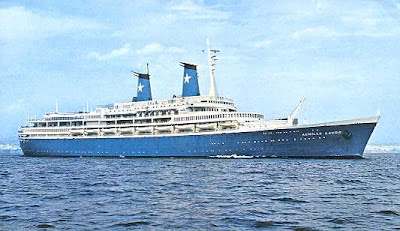 One of the most viewed "posts" on this blog is "WILLEM RUYS becomes ACHILLE LAURO", this ship is also one of my favourite liners of all time, throughout the years I have collected many photos, brochures and literature about this exquisite lady, known as "LA NAVE BLU" or "THE BLUE SHIP" so I have decided to add a few more words here as a tribute to this beautiful former liner which was part of my life for nearly twenty years, I have fond memories of seeing her in Portugal, Spain and Italy a ship with a very distinctive and handsome profile. "ACHILLE LAURO" was for many Maritime Historians and ships enthusiasts the most well known passenger ship of the post-war age, second only to the QE2, not so much because of her graceful lines but rather because of her 1985 hijacking and many incidents she suffered during her life, culminating with her loss by fire in 1994. All started back in 1946 when she was launched as the WILLEM RUYS to be ope
Post a Comment
Read more 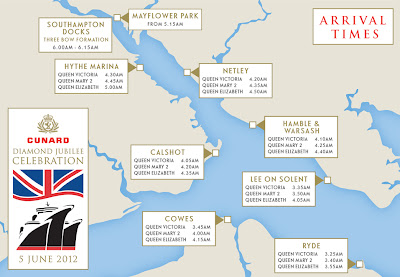 Arrival times for the QUEENS have been revealed for the Diamond Jubilee Celebrations on the 5th of June, please click first image, taken from  http://wearecunardblog.com  for a better view
Post a Comment
Read more
More posts