Showing posts from April, 2012
Show all

"QUEEN MARY 2" was back at Southampton yesterday, the end of her 2012 World voyage, the date also marks the beginning of her scheduled Transatlantic crossings. QM2 is the passenger ship of the XXI century, she was born a legend and she will be in a few years time considered one of the most beautiful Ocean Liners ever to existed. She is graceful, immense and beautiful by design. Photos 27.4.2011
2 comments
Location: Calshot, Hampshire SO45, UK
Read more 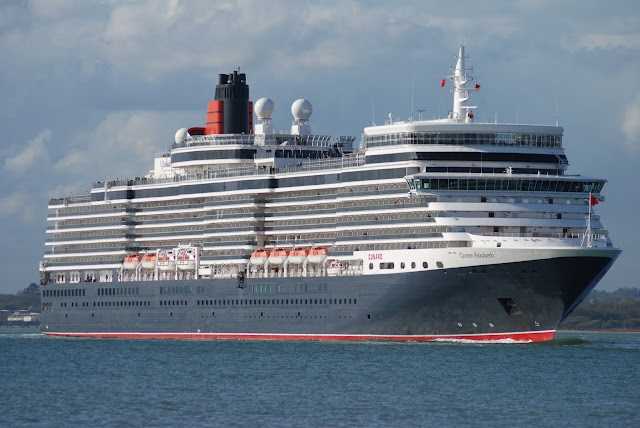 Seen here yesterday departing Southampton is the new "QUEEN ELIZAETH" last addition to the CUNARD fleet, after QM2 the ship is the second largest ever built for this Historic Company. The QE was ordered to the Italian FINCANTIERI shipyards in 2007, she was delivered in October of 2010. Despite being advertised by CUNARD as an Ocean Liner, she does not qualify for this category, she doesn't have the heavy plating throughout her hull and the propulsion system is not one for a dedicated liner. "QUEEN ELIZABETH" is approximately 92.000 GRT and has a top speed of 23.7 knots. She is operated by CUNARD cruising all over the World. Photos 27.4.2012
Post a Comment
Location: Calshot, Hampshire SO45, UK
Read more

"CARPATHIA" the forgotten CUNARDER and her master Captain Rostron 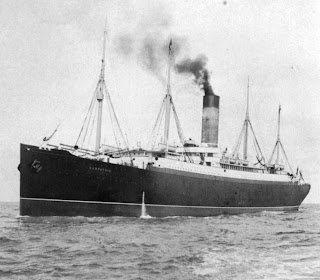 "CARPATHIA" was launched in 1902, she was tasked to cross the Atlantic not at speed like the LUSITANIA or the MAURETANIA, instead she carried her duties which included transporting Hungarian emigrants to the US from Trieste in Italy at a steady pace of 14 knots. "CARPATHIA" became the unlikeliest of heroes when she came to the rescue of the sinking TITANIC on the night of the 14th of April 1912, she was the first ship to the rescue of the liner. At 00:15 of the 15th of April the ship's wireless operator picked up the signals and immediately woke Captain Rostron. "CARPATHIA" was 58 miles away from the TITANIC so the ship would need 4 hours to cover the distance and get to the TITANIC's rescue. Captain Rostron ordered a change of course and instructed the chief engineer to turn off all the heat and hot water, he also instructed all stokers to shovel coal into the furnaces as fast as they could, soon the ship was travelling at 17 knots way above he
Post a Comment
Read more 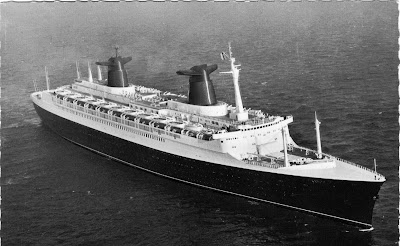 Less than two weeks ago I was in France, the hotel I was staying had a magazine called MAG, the official Le Havre tourist magazine, there was a special focus on the connection of the city with the superb SS FRANCE, Le havre was the port of registry for the French Liner since 1962 until 1974, the main reason for the special report was the commemoration of 50 years since the liner departed Le Havre on her maiden voyage to New york, the date was the 3rd of February of 1962. I have decided that I would have once again to write some words about this amazing passenger ship, my favourite of all time I must admit, after a very careful appreciation and as a result of nearly fifty years of reading books, taken thousands of photographs and travelling on board liners and cruise ships and of course sharing this passion with fellow friends and enthusiasts. So this is my tribute to one of the most remarkable liners ever to have sailed the world's oceans and an homage to fifty years since F
2 comments
Read more 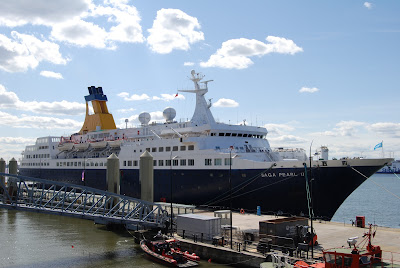 SAGA PEARL II was built in 1981 by Howaldt Swerke-Deutsche Werft at Kiel as the ASTORIA. the ship was ordered by HADAG CRUISE LINES, she was built to a high standard all those years ago. In 2009 the ship was acquired by SAGA CRUISES and renamed "SAGA PEARL II", before entering service she underwent a three month refit at Swansea Dry Dock in the UK, she was ready for her first cruise with the new operator in March of 2010 "SAGA PEARL II" is 18.591 GRT, normally cruises at 20 knots and has capacity for 600 passengers. Photos of the ship today at Liverpool
Post a Comment
Location: Liverpool, Merseyside, UK
Read more

- April 15, 2012
The cruise ship M.V. "MARCO POLO" visited Liverpool today on a TITANIC-themed voyage. Passengers have witnessed the rededication of the city's monument evocative to the tragedy. The Merseyside Maritime Museum opened one hour earlier in order to allow visitors to an exclusive tour of the Museum and to hear a lecture by Maritime Expert Alan Scarth. Alan's book "TITANIC AND LIVERPOOL" provided basis for the "TITANIC THE UNTOLD STORY" exhibition now showing at the Museum. After "BALMORAL" the "MARCO POLO" is the second cruise ship to have visited the city of Liverpool in April on a very appropriate TITANIC-Themed voyage, today exactly 100 years since the TITANIC booked a place in History. Once again the weather was kind to the many visitors attending different events connected with the date "MARCO POLO" was built in 1965 as the ALEXANDR PUSHKIN for the Soviet Union's BALTIC SHIPPING CO. The ship today is 22
Post a Comment
Read more 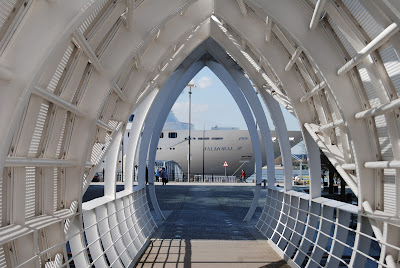 The FRED OLSEN Cruise Ship "BALMORAL" visited Liverpool today, it's the first passenger ship visiting this historic city this year. "BALMORAL" was built in 1988 as the CROWN ODISSEY, she entered service with FRED OLSEN in 2008 after been lengthened by 30 meters, she is 43.375 GRT, she looked splendid, here's some photos taken today during the visit with Liverpool bathed in beautiful Springtime sunshine. "BALMORAL" at berth seen from a different, more intimate perspective, one of the highlights of the Liverpool call was the organised visit to the TITANIC "the untold story" exhibition taking place at the Maritime Museum, a must of a visit. Despite being lengthened the ship still retains an attractive profile
Post a Comment
Location: Liverpool, Merseyside, UK
Read more

- April 02, 2012
The SEACITY MUSEUM opens in Southampton on the 10th of April. The museum explores and celebrates the connection of the city's people with the sea, an exhibition known as "Southampton-Gateway to the World". The second permanent display is entitled "Southampton Titanic Story" which includes an interactive model of the ship, 549 people that lost their lives on the tragedy were from Southampton so the museum remembers and prepares to mark a century since TITANIC sank. A special exhibition "Titanic the legend" will also run until 2013 which examines the effect on ship design following the ship's sinking. For all other details and information, please visit  www.seacitymuseum.co.uk . Image above taken from the museum's website
2 comments
Location: Southampton, UK
Read more

TITANIC BELFAST, the world's largest TITANIC visitor experience is now open to the public. The new exhibition is housed in an iconic state-of-the-art six floor building and extending over nine galleries. It tells the story of the TITANIC from the conception in the early 1900's, her construction and launch, to her famous maiden voyage and place in history. This unmissable experience is located in the heart of Belfast, right beside the historic site of the ship's construction, the famous HARLAND AND WOLFF legendary Shipyard. For more information please visit the official website  www.titanicbelfast.com . Images included taken from the TITANIC BELFAST website
1 comment
Read more 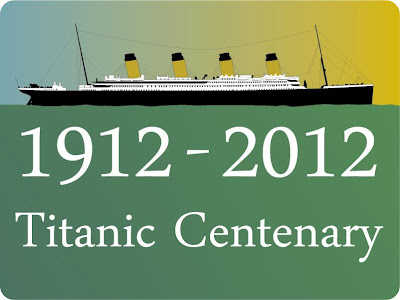 April 2012 marks the 100th anniversary of the sinking of  RMS "TITANIC". The ship was order nr 401 at the famous Belfast Shipyard HARLAND AND WOLFF. The ship of dreams was believed to be unsinkable  because of the revolutionary design of the bulkheads, she was the most advanced engineering project produced by men. TITANIC was lost on her maiden voyage with the loss of 1503 people, the sinking of the largest ship in the world at the time, made her the most best-known liner of all time and certainly the most talked about passenger ship in history. TITANIC collided with an iceberg on the night of the 14th of April 1912 apparently ignoring the warnings of  unusual amounts of ice and icebergs drifting south on that particular year. To this day controversy surrounds the circumstances of this collision, there were accusations of negligence by the Captain and some of his officers, accusations against the Chairman of the White Star Line for insisting that the ship was kept at 2
Post a Comment
Read more
More posts