Showing posts from March, 2013
Show all

QUEENS in Norway by Harald Oanes 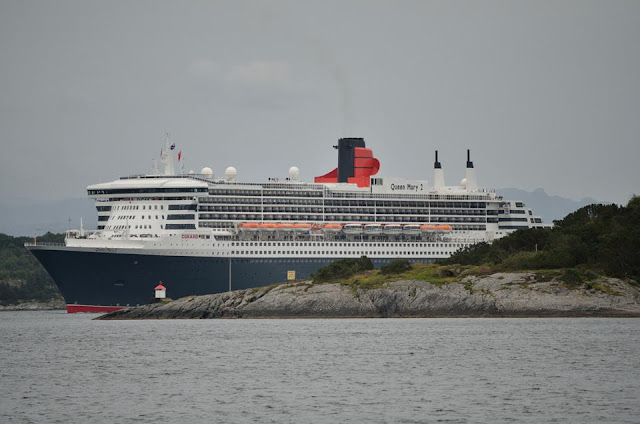 CUNARD will visit Liverpool in 2014 to celebrate AQUITANIA's maiden departure 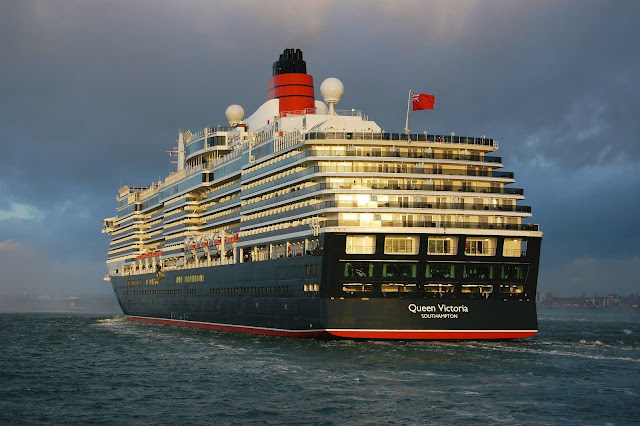 CUNARD has last week announced that "QUEEN VICTORIA" will visit Liverpool on the 30.5.2014 during an around the British Isles cruise, the date marks the 100th Anniversary of the maiden voyage of a CUNARD legend, the fabulous AQUITANIA one of the most historic and prestigious Liners of the CUNARD LINE. This should be a momentous occasion, Liverpool knows how to make the most of these events, a date to pencil on your diary. Photos of the QV arriving for the very first time at Southampton, 7.12.2007
Post a Comment
Read more

"GUGLIELMO MARCONI" at Hobart for the first time 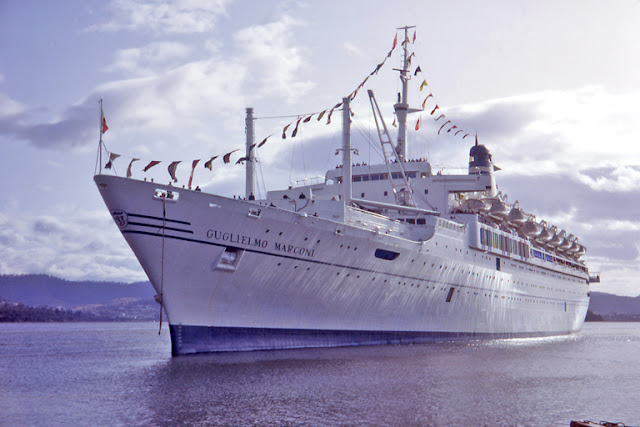 In this Historic Photo we can see the Lloyd Triestino "GUGLIELMO MARCONI" arriving at Hobart in Australia for the first time, I don't have the exact date but it would have been early December 1963, the ship departed Italy on her maiden voyage in November of that year and she took three weeks to get to Australia. For other posts and images of the Australian Lloyd Triestino twin sisters, the largest ever built passenger liners for this Shipping Company please visit my blog dedicated to the ships  here . Photo Copyright, Lindsey Rex from Melbourne
1 comment
Location: Hobart TAS, Australia
Read more 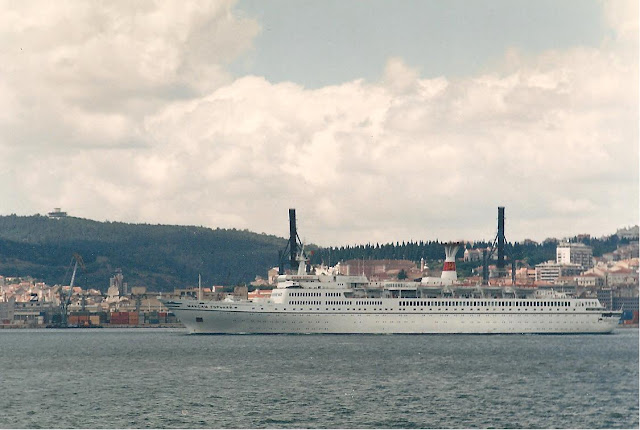 The ship included in this "post" is another classic beauty and one of my favourites as well. Built in 1969 as the "HAMBURG" for German Atlantik Line, the first major passenger ship built in Germany since 1938, she was built by Howaldtswerke-Deutsche in Hamburg, her life with the German operator was short-lived, she was sold to Black Sea Shipping Co in 1974 and renamed "MAXIM GORKIY". She was about 25.000 GRT and had a top speed of 23 knots, the ship could carry just under 800 passengers. In 1988 she was chartered to the German Cruise operator Phoenix Reisen on a long term basis, she was in fact sailing for this company until the very end of her career in 2008 when she was withdrawn. Various attempts failed to save the ship from the scrapyard, including taken her back to Hamburg and be used as an Hotel ship. Unfortunately she was sold to scrap in February of 2009 and ended her days later that year at Alang. "MAXIM GORKIY" is seen here in Lisb
Post a Comment
Location: 2715-311 Lisbon, Portugal
Read more 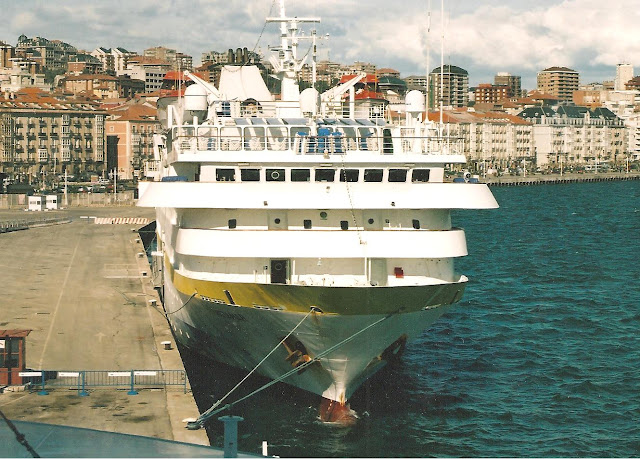 Vistamar - Wikipedia : The 1989 Built "VISTAMAR" is seen here at Santander during a cruise to the Cantabria Capital in Northern Spain, a beautiful Spanish County that lately has witnessed an increase in Passenger Ships visits and in Lisbon during the summer of 2004. The Photo in Spain was taken from on board BRITTANY FERRIES brand new "PONT-AVEN". For further details of the "VISTAMAR" please click the link above.
Post a Comment
Read more

BLACK WATCH and FUNCHAL in Lisbon during the late nighties 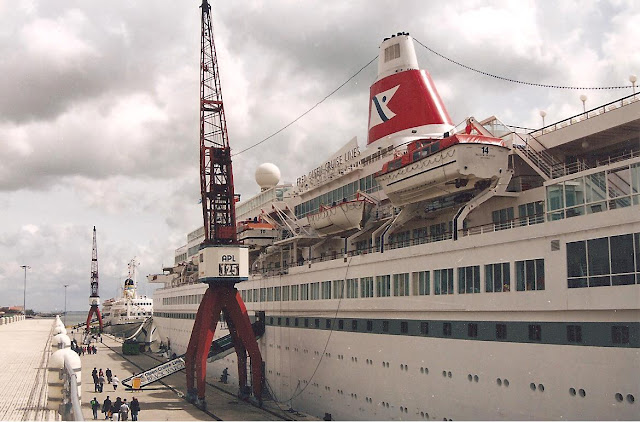 After a few "posts" about the Superliners of the early 20th century, our Blog takes now to the year of 1997  when the above photos were taken. "FUNCHAL" and "BLACK WATCH" can be seen at Lisbon, the 1961 built "FUNCHAL" taken on passengers for another cruise and the FRED OLSEN ship during a call to the Portuguese Capital. "FUNCHAL" was already sailing for ARCALIA SHIPPING while "BLACK WATCH" had just joined FRED OLSEN CRUISE LINES, the ship was originally built in 1972 as the ROYAL VIKING STAR, she was purchased and has been operated since then by FRED OLSEN, so much as changed since 1997 but both ships are still with us, BLACK WATCH still going strong with FRED OLSEN and a much loved ship by her passengers while the "FUNCHAL" is expected to go back to cruising soon after being laid-up in Lisbon since September 2010.
2 comments
Location: 2715-311 Lisbon, Portugal
Read more 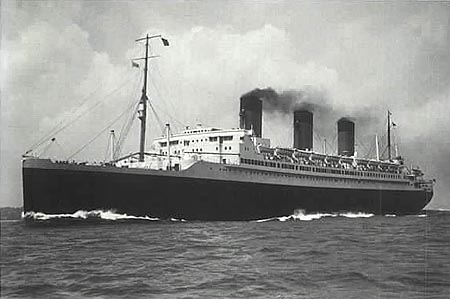 The French Liner "ILE DE FRANCE" was for many scholars and Historians the most important and innovative Passenger Liner of the 1920's. She was the first major liner to be built after WWI, launched in 1926 she was 43.000 G.T. She was fondly known as "ILE", when she came into service the great excitement  about this new ship was not about speed or size, but her interior decoration. "ILE DE FRANCE" began "Art Deco" style at sea, she created what became known as "Ocean Liner Style", with glamorous and chic interiors she was stunning, she even carried a small plane on board that would be launched when the ship was about 200 miles from her destination, she would beat her rivals delivering the mail, bags of mail would reach shore while the ship was still at sea, "ILE DE FRANCE" was the first of a new breed of much larger decoratively Atlantic Liners to come, she had a reputation for glamour that would be followed in a
Post a Comment
Read more 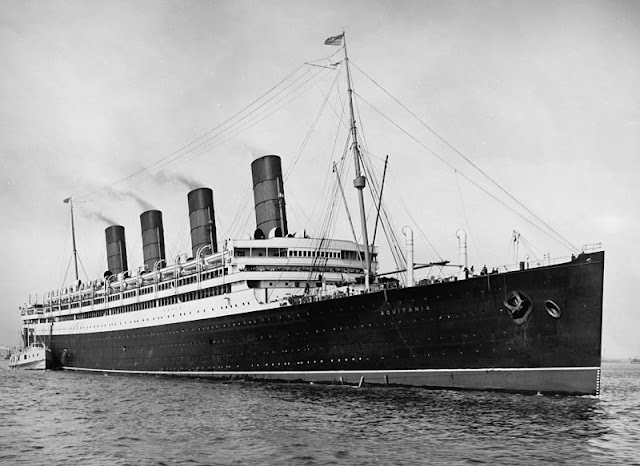 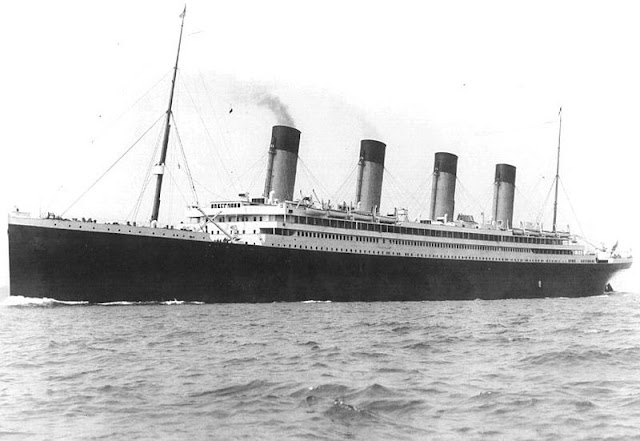 RMS "OLYMPIC" was at the time of her construction a huge milestone in marine engineering, she was the first ship to exceed 40.000 GRT her interiors, furnishings and facilities left her in a class of her own. TITANIC's collision and sinking in 1912 ensured that spotlight on the OLYMPIC-CLASS ships remained focused on TITANIC but at the time of her launch "OLYMPIC" was the shape of things to come, the main Shipping Lines of the time started immediately after her introduction competing to match her. "OLYMPIC" had a very distinguished not long career, she became known as the "Old Reliable" during her troop services in the First World War. She was scrapped in October of 1935 an early departure for one of the most significant Passenger Liners of the early 20th century. Photos above from my collection
1 comment
Read more

Superliners of the early 20th century, the Olympic/Titanic/Britannic trio

- March 11, 2013
"OLYMPIC" arriving New York on her maiden voyage, June 1911                 "TITANIC" leaving Belfast in April of 2012 on her way to Southampton, not for her sea trials as commonly stated, in fact the OLYMPIC was so successful that "TITANIC" only had a few adjustments on her delivery voyage from Belfast to Southampton prior to her maiden voyage. After the introduction of CUNARD's "LUSITANIA" and "MAURETANIA", Bruce Ismay, Chairman of the WHITE STAR LINE insisted that they should build not two, but three giant liners, the largest in the World. Bruce Ismay and Lord Pirrie, Chairman of HARLAND & WOLFF unveiled plans for the building of three 46.000 GRT Passenger liners, the most luxurious, safest and largest ships in the World, "OLYMPIC", "TITANIC" and "BRITANNIC" were born. "OLYMPIC" was the forerunner, she was the last word in luxury, a floating palace, the ship
Post a Comment
Read more

Superliners of the early 20th century, the building of the mighty LUSITANIA and MAURETANIA 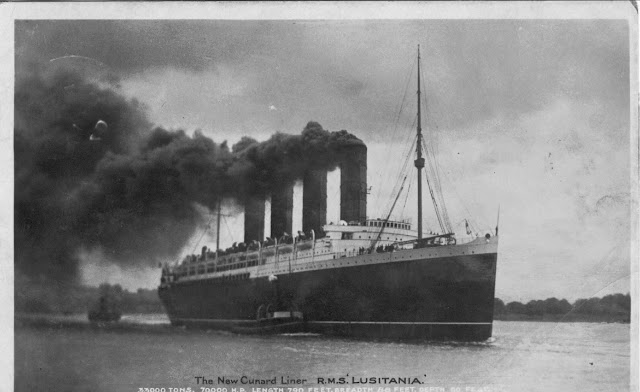 Samuel Cunard founded the CUNARD LINE in 1840, Cunard a very successful Nova Scotia Shipping owner won the first British mail contract to establish a regular service across the North Atlantic. In 1902, Lord Inverclyde chairman of the CUNARD head office in Liverpool approached the British Government seeking help to build two huge superliners, the biggest, fastest and most powerful passenger liners ever built. CUNARD was alarmed not only with competition mainly from the Germans but also with a new American Tycoon, J. P. Morgan founder of the International Mercantile Marine, Morgan was buying the most powerful British Passenger Firms, including the White Star Line. The British Government agreed with a loan so the "LUSITANIA" and the "MAURITANIA" came into service in 1907. "LUSITANIA" the first, built by John BROWN & Co. Ltd at Clydebank was for a very short period of time the largest and fastest ship in the World, she was 31.550 GRT, the
2 comments
Read more

Superliners of the early 20th century, The North German Lloyd Quartet of four-stackers 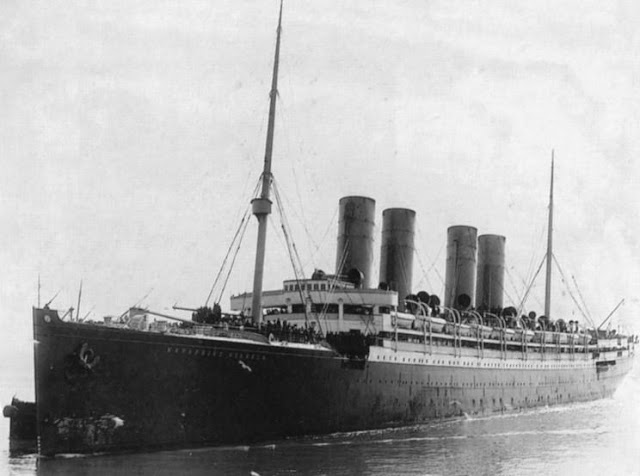 Superliners of the early 20th Century, British and German response to the "KAISER WILHELM DER GROSSE" 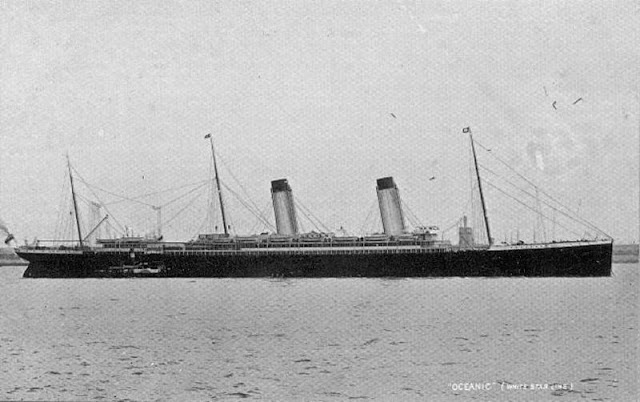 "OCEANIC" of 1899 of White Star Line                        "DEUTSCHLAND" of 1900 operated by Hamburg-Amerika Line After the introduction of "KAISER WILHELM GROSSE" in 1897, the British and even German's greatest rival of North German Lloyd, the 1847 founded Hamburg-Amerika Line were startled. The first answer to the 1897 superliner came from the British two years later, the "OCEANIC" built by Harland & Wolff an Historic Shipyard founded in 1861 supervised by Thomas Ismay a Liverpool shipowner who in 1871 bought a bankrupt fleet of clipper-ships operating from the UK to Australia, this company was called the White Star Line, so "OCEANIC" at 17.272 G.T. was the largest passenger liner in the World, the ship had two funnels and three masts, she departed on her maiden voyage on the 6.9.1899, she became known as the "Queen of the Ocean", the ship ran aground off Foula/Shetlan
1 comment
Read more 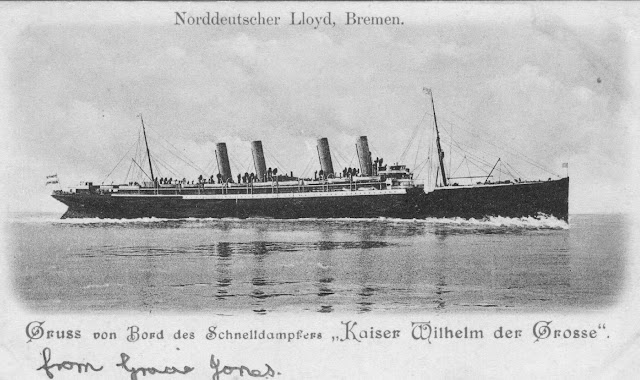 In 1871 when the King of Prussia WILHELM became Kaiser of a new United Nation, a new dominant power in Europe emerged, this United Nation was of course Germany. At the end of the century design and technology of Ocean Liners was changing, Germany was planning to become a major seapower, they wanted to show the World their Industrial might, after borrowing skills and craftsmen from British Yards the Germans built a liner that was to change Transatlantic Fashion forever, a new liner built in Germany not Britain at the time already the Ship Building Nation of the World, this liner was the "KAISER WILHELM DER GROSSE" often described as the World's first "SUPERLINER", she was to be the first of a new breed of German Passenger Liners, she was built in 1897 by VULCAN SHIPYARDS at Stettin, the Kaiser attended her launching held in May of that year, the ship named after his Grandfather. Later in the year, 19.9.1897, the new ship departed Bremerhaven on her maiden vo
Post a Comment
Read more
More posts