Showing posts from June, 2014
Show all

- June 22, 2014
Cruise Ship "NIEUW AMSTERDAM" entered service in 2010, she is a VISTA CLASS ship, commonly known as a Signature Class Ship, which basically is a derivative design of the Vista Class ships, she has a very similar design of the CUNARD, "QUEEN ELIZABETH" which also entered service in 2010, both ships have a steeper stern and one more deck than the standard Vista Class ships, she is seen here at Barcelona last week, 16.6.2014.
Post a Comment
Location: Barcelona, Spain
Read more

- June 17, 2014
"QUEEN ELIZABETH" is the youngest passenger ship of the prestigious CUNARD LINE, the ship was ordered in 2007 at the Italian Shipyard FINCANTIERI, the same year that the QUEEN VICTORIA debuted, also built at the same yard. At 90.901 G.T., "QUEEN ELIZABETH" is the second largest passenger ship ever to be operated by the CUNARD LINE, she is exceeded only by Flagship, "QUEEN MARY 2". "QUEEN ELIZABETH" is very similar in design to the "QUEEN VICTORIA", the main exterior profile differences are, a steeper stern and also at the forward end of deck 11 there is a roof covering the games deck. Last Sunday we were both in Barcelona so I was really excited with the possibility of doing some photos of the ship. Her berth was Terminal C on the "Moll D' Adossat", where Terminals A, B, C and D are located, during the morning the light was very good so gave me a tremendous opportunity for some close-up photos, a very favourite hobby of mi
Post a Comment
Location: Barcelona, Spain
Read more

- June 08, 2014
"QUEEN VICTORIA" left Liverpool early afternoon, about 3.45pm on the 31st of May, a gorgeous sunny and warm day, can't wait to see her back next year with her fleet mates QUEEN ELIZABETH and QUEEN MARY 2, she is a special ship to me, saw her arriving for the very first time at Southampton back in December of 2007, she is one of my favourite new ships. Photos taken from New Brighton
1 comment
Read more 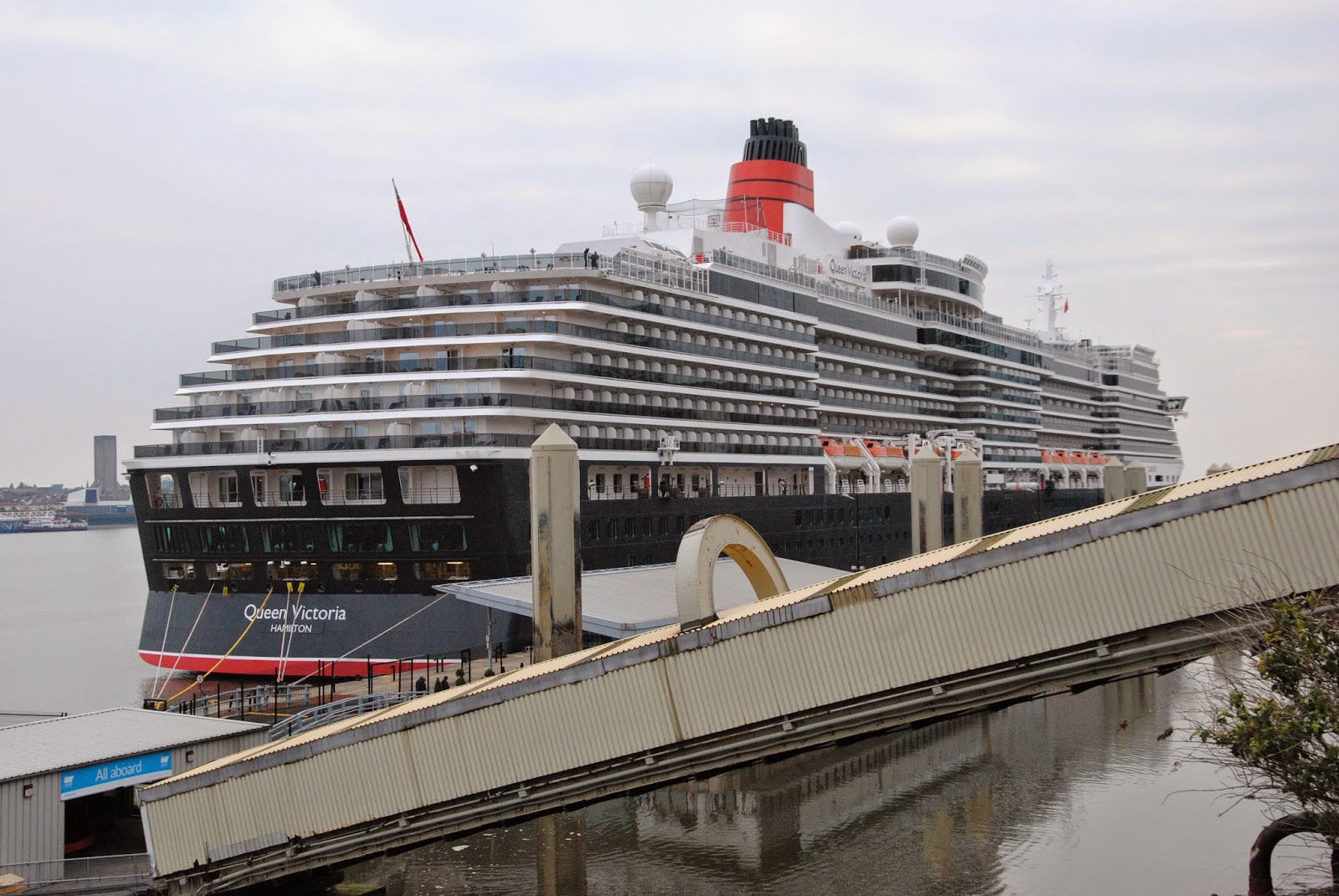 The affiliation between CUNARD and the city of Liverpool goes back to 1840 and is still very much alive today, despite Southampton being the UK home port for the CUNARD LINE.  "QUEEN VICTORIA" visited Liverpool last 30th and 31st of May to remember the maiden departure of another famous CUNARD passenger ship the "AQUITANIA", she left the Mersey for New York on the 31.5.1914. It never fails to impress me the amount of people that turns out to see the CUNARD ships every time they visit, this was quite an extraordinary event witnessed by thousands, a great warm up for next May 2015 when the three current passenger ships of the CUNARD LINE fleet visit once again the city of Liverpool on the same day to officially celebrate 175 years of the departure of the BRITANNIA to the New World. This and next posts will show as much as possible the visit of "QUEEN VICTORIA" to the Mersey, a sea of photos that will do the writing and talking, 30th and 31st
Post a Comment
Location: Liverpool, Merseyside, UK
Read more
More posts